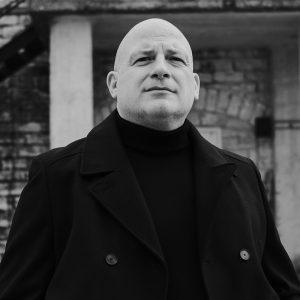 M.D. Massey is the author of twenty urban fantasy and paranormal suspense novels, including the Colin McCool Paranormal Suspense Series, THEM Post-Apocalyptic Series, and The Junkyard Druid Novellas. He’s also the host of the Urban Fantasy Author Podcast.

Massey currently lives in the Hill Country near Austin, Texas, which is where much of his fiction is set. Most days you can find him in a local coffee shop or in his office working on his next book, or in his garage pummeling inanimate objects. If you’d like to find out more about his work and get a FREE book, visit his website at MDMassey.com.

The following Q&A consists of excerpts from reviews conducted by New In Books and Many Books.

What drew you to the genre?

Everyone always says, “Write what you know, write what you read” and that’s what I did. I read a lot of urban fantasy, or at least I used to until I started writing full-time. Lately, between my writing schedule and keeping up with my day job gig (which has become my side hustle now), I don’t have much time to read at all. In fact, I currently have John Conroe’s latest book, Summer Reign, and book three in Tao Wong’s System Apocalypse LitRPG series sitting idle on my Kindle, waiting to be read.

What inspired you to write an urban fantasy featuring fae?

I’ve been fascinated with fairies since I was young, a preoccupation that started when I first read the story of the Cottingley Fairies. Even as a child I could tell that the photos had been faked, but the idea that the Fair Folk could be lurking in my own backyard or in the woods where I liked to play… well, that’s enough to spark any child’s imagination, don’t you think?

When I decided to write my first novel I was certain that I wanted the fae to feature prominently. One of my early abandoned manuscripts was about a “fae hunter,” not a fae who hunts, but a human who hunted fae. It was horrible, but the idea later evolved into Colin McCool and the Vampire Dwarf, and later that turned into the Junkyard Druid novels.

Tell us more about Colin McCool. Why is he such a relatable character? How has he grown as a person through the series?

Colin is a deeply-flawed person who is just trying to do the best he can. He’s a good person at heart, but he’s also brash, prone to violence, and as a shifter, he has a sociopathic side to his personality that he really can’t control… yet. He’s experienced a lot of pain in his life, and to compensate for his own losses and failures he’s always trying to right wrongs and protect other people. Plus, he’s a bit of a smartass. It’s hard to dislike a character like that.

What or who inspired you to become an author?

Like most authors, I love to read, and if I had a vice it would be buying way too many books. My mother was a teacher, and during my pre-school years, she would let me pick out a Little Golden Book whenever we went to the store. I was reading books like Homer’s Odyssey and The Silmarillion before I was tall enough to see over the counter at the public library. These days I can’t walk into a bookstore without leaving with an armful of books.

Avid readers tend to become aspiring writers, and I was no exception. When I was in my twenties a journalist friend encouraged me to write and publish a non-fiction book, so I did. By my late thirties I’d written and published a few moderately successful non-fiction works, so I thought, “How hard could it be to write a fiction novel?”

As it turned out, very hard indeed. I took a few writing courses, read a lot of books on writing fiction, and stumbled through a few unfinished manuscripts. Then in 2013, I read James Scott Bell’s Plot & Structure, and it was like a light bulb went off inside my head. I completed and published my first novel in December of that same year, and I haven’t looked back since.

If you were a teacher, what book would you assign to your class?

For example, my son recently fell in love with Dav Pilkey’s Dog Man books. Before those books came along, we couldn’t get him to read much at all on his own. Now, he reads every day. So, I’d assign my students the task of finding a book they would enjoy reading, and then instruct them to read that book for the sheer enjoyment of it.

I wake up between 6 am and 7 am, even though I don’t have to. I drink some coffee and check email first thing, then I get on the treadmill for half an hour, during which time I take care of day job stuff. After that, I listen to writing and publishing podcasts while I shower and get dressed.

Once I’ve made myself presentable, I get more caffeine in me before hitting my writing desk by 9 am. I write until I hit my word count goal for the day, taking five-minute breaks every hour. After I’m done writing for the day, I eat lunch and do more day job activities, then I train martial arts or I read. By then it’s time to get my kid from school, so I spend time with him until his mom gets home.

After that, I do whatever additional work I need to do that day, or I relax by reading or watching TV before I go to bed at no later than 10 pm. I used to be a night owl, but these days if I go to bed past 10 pm I’m a wreck the next day and my writing output suffers. So, it’s early to bed and early to rise the next day to do it all over again.

Flight, because I’ve always wanted to fly. In fact, I wanted to be a pilot but my vision was too poor. So, definitely flight, and preferably at super speeds, because necessarily that superpower comes with other superpowers, like limited invulnerability and stamina due to the stresses of high-speed flight at altitude. I think you can tell that I’ve really thought this through.

Where can readers discover more of your work or interact with you?