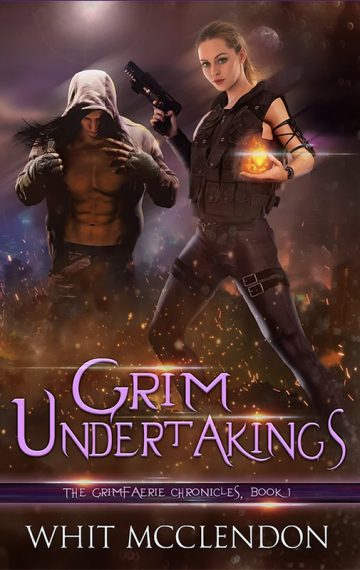 Not all of the Faerie are sweet little Pixies. There are a few who do the dirty work on the side of the Light. Unknown protectors walk among us, gleefully using fang and claw and magick, leaving a bloody trail of vanquished evildoers in their wake. They are the GrimFaeries. If you are evil enough to try to tip the balance towards the Dark side, you might just get a visit from one. And they won’t be leaving a coin under your pillow.

When Kane the Grim is tasked with finding a serial murderer in Houston, he discovers that there is much more at stake. Magick is afoot, and an evil sorcerer is behind the killings. When he rescues a witch from certain death, his new mission becomes clear: stop the bad guy before it’s too late. Teaming up with a witch who’s as good with a gun as with her spells, they’ll face monsters, magick, and M-16’s, as they risk everything to stop the evil in its tracks before all is lost.

If you’re a fan of Jim Butcher’s Dresden Files, you’ll love the first tale of the GrimFaerie Chronicles, an exciting new urban fantasy from Whit McClendon, the author of the Fire of the Jidaan Trilogy!